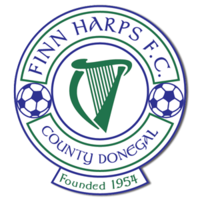 Finn Harps were founded in 1954 and first played in the league in 1969. Their legal structure is similar to Cork and Sligo Rovers and they operate as a co-op under the name of Finn Harps Co-operative society Limited (No: 4898R) and this legal entity was created in January'97. Finn Harps currently play their home games in Finn Park but are hoping to move to a new stadium that has been in the pipeline for many years and in recent months positive progress has been noted in terms of this development http://www.fai.ie/domestic/news/fai-welcomes-finn-harps-stadium-project-funding Over the 4 years in review here Harps finished 5th in the first division, followed by 2nd and a playoff win for promotion to the premier division in 2015, followed by 10th in the premier division in 2016 and relegation in 2017 with an 11th place finish and the league being reduced to 10 teams.

Over the 4 years, Finn Harps made a small loss of circa (€14k) with all this loss coming in 2017. It would appear in 2017 that Harps tried to avoid relegation with the reduction in league size with a large increase in payroll which was up (€70k) on 2016.

Overall over the 4 years Harps looks like a prudently run club at the minute with the club not really spending more than they are taking in. While they appear to be loss making, if you exclude depreciation on the stadium and the grant write back the club would have made a cash surplus of circa +€25k. This depreciation and grant amortisation is to do with the stadium assets.

In terms of revenue Harps have increased that significantly over the 4 years, a promotion push in 2015 increased gate receipts by almost +€60k on 2014 and gates again increased by +€65k in 2016 with Harps being in the premier division. Gates fell a little in 2017 as the team were towards the bottom of the table. Being in the premier and having a level of success is very important in terms of revenue to a club like Harps in looking at the P&L.

In terms of revenue and thus resources available to invest in the team Harps would have the lowest revenue of the teams that share their data. The table below shows that Harps bring in only 17% of what Cork City bring in and only 1/2 of what Bohs bring in. This disparity in terms of revenue immediately puts them at a disadvantage in terms of staying competitive.

Like Sligo Rovers, Harps get decent support from their supports and local community with with in 2017 circa €125k of their revenue coming from Draw Tickets, Lotto & Half Time draws, Donations and 500 club donations. This is a very big revenue source for the club and accounts for circa 27% of all their revenue.

In terms of costs, like most clubs Harps main cost is the playing side of the club. Payroll was very modest in 2014 and 2015 when in the first division at (€93k) and (€109k) but did increase with the move to the premier division. In 2016 this cost increased to (€164k) with a further increase in 2017 to (€232k). Most clubs don't have to declare their payroll figure any more but of those that have this is by far the lowest payroll cost to date.

While Harps have been well run over the last 4 years this may not be the case since they first started trading as the company has accumulated losses of circa (€627k) and given that the capital invested is only +177k the club has negative reserves of (€450k).

The principle asset Harps have relates to the stadium and property which appears to be on a long leasehold. This asset is valued in the books at circa +€774k at Nov'17.

Harps have very little current assets but do owe (€333k) in current liabilities at Nov'17. Just over 1/2 of this is owed to fans of the clubs through personal loans which does reduce the likelihood of these debts being called in. This also again highlights the dependence of the club on its fans.

Harps biggest "liability" relates to Government grants and this is not a real liability as such and won't have to be repaid as long at the ground is used. This amount is not disclosed in full but would be circa (€720k) at Nov'17 and is more an accounting liability than a real liability. Harps also have a debt of (€228k) in long term debts but as this amount hasn't changed in 4 years there is clearly no immediate threat of this being required to be repaid by the club.

So while the balance sheet is not very healthy, the 2 main debts owed to fans and a long term liability make up most of the "real" debt and on that basis there seems little risk of Harps being in any trouble with their debt given they are being run prudently today.

Harps are another club living within their means but struggling in terms of performance as a result. Harps don't have a benefactor and have had no European money in the 4 year period, but as the revenue shows just being in the premier division makes a big difference to the club. Looking at the Balance Sheet Harps did live outside their means in the past and have the legacy debt as a result but thankfully this debt is structured so as not to threaten their future at the minute.

Harps will now need to focus on getting back to the premier division (they have a good chance of this in 2018) while moving ahead with the new stadium. However competing in the premier division will remain a challenge given their location and population in attracting both players and fans in order to drive revenue to be able to compete. This challenge though is not unique to Harps as the gap widens even within the premier division between the teams with Europe/Benefactors and those without.
Posted by chippie at 16:24

Long time League of Ireland (Bohs) fan with an interest in finance. Want fans of clubs to understand their finances in as simple way a possible, with the limited data available.
Would love to see a full time professional league based on a sustainable model in the future. If we ever get there, time will tell.