I previously did post on the 3 years to Nov'16  https://leagueofirelandfinance.blogspot.com/2018/08/shamrock-rovers-fc-financial-update.html and a lot has changed since then.

Also a new legal entity called Shamrock Rovers Academy Limited was created which is 100% owned by the operating club. This would line up with their plans to invest in that side of the club and they have done so over the last 2 years. Hopefully the table below shows this as its own of the more complicated structures. 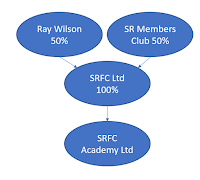 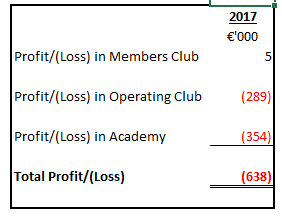 In 2017 Rovers split out the assets and costs of the academy making it easier to compare the regular football activities to that of other clubs. The members club effectively operates at break even, it collects subs and passes this money on to the operating club for season tickets etc.

Rovers are one of the few clubs that in 2017 have given payroll information in terms of costs so we can compare their cost here v some other clubs. In 2017 in the operating company Rovers spent (€1.2m) on 34 employees of which 28 relate to the playing and management side. As a comparison in 2017 Cork City who won the league spent (€1.1m) on wages, Sligo Rovers spent (€546k) and Finn Harps (€232k). The 2 tier nature of  the league is highlighted here with Rovers & Cork well ahead of the likes of Sligo and Harps in terms of playing resources.

In terms of the academy, this is a new company with only 1 year of  trading. In the year the academy lost (€354k). Its 2 main costs in the year were payroll of (€83k) and depreciation on its investment in Roadstone of (€79k), the second one more an accounting cost than a cash cost. The loss in the year was in line with their expectations as they get this off the ground. There is not much info in the accounts on what type of income/costs that are captured in here, if the Bazunu transfer goes into the academy accounts in 2018 it will obviously make a big different to that P&L. I think from Rovers point of view splitting the 2 entities, the first team and academy into 2 companies is good as they can clearly measure both.

The operating company has accumulated losses of (€1.63m) and negative reserves of (€1.18m) at Nov'17. In affect this has been funded by a €1.225m long term loan from Ray Wilson. This is an interest free loan that per the accounts won't be asked to be repaid in the next 12 months. On that basis Rovers have no trading concerns.

The principle asset Rovers now own sits in the academy company. The club have invested circa €610k in facilities in Roadstone over the last 2 years. They have a 10 year licence at this venue per the 2016 accounts. The academy company owes circa (€1m) in current liabilities and there is no breakdown of this but I would assume most is owed to the operating company and Ray Wilson who are funding this investment.

Rovers are doing things differently to other clubs and also doing some of the same things;

On the different side to others they are heavily investing in the youth side of the club, between operating losses and capital investment the club has spent at least €0.9m over 2016 and 2017 and probably more but I can't strip those costs out of 2016. Time will tell if this works or not, but the standard plan of putting all the money into the first team hasn't worked for most clubs so a change of model can't do any harm. The Bazunu sale in 2018 is a big lift to that plan.

On the same side to others they are losing money on running the club. They have lost circa (€1.5m) over 2014 to 2017 with (€289k) in 2017 alone. This is no different to most clubs, however Rovers benefactor is loaning money rather than putting it through the P&L like Pats, Derry & Limerick and as a result they build up losses. They actually spent more in payroll than the champions did in 2017 which shows their intent in the league. They have the €1.225m loan and as its from a fan they are in a strong position financially but like most clubs they are not operating on a sustainable basis. This is a league wide challenge but Rovers losing money, with €440k from Europe and the second highest average attendance in 2017 shows the challenge for all clubs. http://www.extratime.ie/articles/20256/25-increase-in-attendances-for-league-of-ireland/

Long time League of Ireland (Bohs) fan with an interest in finance. Want fans of clubs to understand their finances in as simple way a possible, with the limited data available.
Would love to see a full time professional league based on a sustainable model in the future. If we ever get there, time will tell.